Menu
Home >> About Us >> Meet the Cabinet Minister 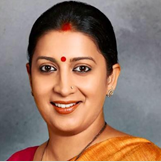 SMRITI ZUBIN IRANI
Born on 23rd March 1976, Mrs. Smriti Zubin Irani was elected to the Rajya Sabha, the Upper House of Indian Parliament representing the State of Gujarat in 2011. In August 2017 she was re-elected to Rajya Sabha from the state of Gujarat. In the 2019 General Elections, she was elected to the House of the People ‘Lok Sabha' from the constituency of Amethi in Uttar Pradesh by defeating the then National President of the Indian National Congress. Mrs. Irani is currently serving as the Union Minister for Women & Child Development and Minister for Minority Affairs. She has previously served as the Union Minister for Education (formerly known as Human Resource Development) from May 2014 to July 2016, Minister for Information & Broadcasting from July 2017 to May 2018 and Minister for Textiles from July 2016 to July 2021. She is India’s youngest Union Cabinet Minister in the Government and the first woman to hold office as Minister for Education and as Minister of Textiles.

As Education Minister, Mrs. Irani introduced various educational reforms to upscale India’s capacities in the field of research, innovation and technology. She was instrumental in conceiving the New Education Policy of India and initiated several large scale projects including India’s first MOOC platform SWAYAM, the National Digital Library and a Global Network of Academicians called GIAN. She launched IM-PRINT to foster research, innovation and technology among students and academia. As Textiles Minister during Covid-19 Pandemic, she managed to galvanise both public and private sector companies to make India the world’s second largest producer of PPE in a span of three months amidst the global lockdown. As part of a national initiative to make India self-reliant, she gave impetus to advanced textiles technologies which included her effort to notify important HSN codes for the crucial Technical Textiles sector. In the last three years as Minister for Women & Child Development, Mrs. Irani has worked towards strengthening women & child protection services in India; including making child pornography a criminal offence through POCSO Amendment Act.

While serving as National President of her political party the Bharatiya Janta Party’s Women’s Wing, she successfully pursued Permanent Commission for Women in the Indian Army by facilitating legal aid to women officers. She is credited with launching of ‘Saksham’- the first ever Vision Document released by any political party in India underlining policies, programs and implementation tools for the upliftment of the Differently-abled in India. In the 126th Assembly of the Inter Parliamentary Union (IPU), Mrs. Irani was unanimously elected as a Member representing the Asia Pacific Region to the Task Force responsible for establishing the first ever Committee for Young Parliamentarians in the IPU. At the same Assembly, Mrs. Irani was also unanimously elected by Member Nations as Rapporteur for the Standing Committee on Sustainable Development, Finance and Trade. The World Economic Forum has named Mrs. Irani as the Young Global Leader from India for the year 2015. She has also served as the USAID Goodwill Ambassador to India for the WHO-ORS program before her political debut in India.

Besides being an active social & political activist, Smriti Irani has had a successful career as a Media Professional for over two decades starting from 1994. During this period, she worked across different fields of media including creating content for news & entertainment Television networks, films and theatre projects in 4 Indian languages. She has also authored a book and contributed as a column writer to 2 national dailies.